Some of you are probably wonder why in the world I haven’t blogged at all lately. Part of the reason why is because I am a huge procrastinator, and I typically find new Netflix series to binge watch. Recently I started a series called Orphan Black and it’s about a girl who finds herself in a sticky situation and discovers she is part of a clone club. It’s a really good show, and it’s Canadian! I highly recommend you start watching it and binge watch with me. There are three seasons on Netflix and I’ve already started season 3.

Spring has finally sprung here in the Netherlands and tulips and other sorts of flowers are in bloom. I definitely picked the right semester to study here because I get to see the changing of seasons and see the real beauty this country has to offer. At the end of this month my mum is coming to visit me and I will be taking her to the Keukenhof tulip fields. I can’t wait to see her and spend some quality time showing her this beautiful country that I have the opportunity of living in for six months.

About a week or two ago we started to experience some warmer weather here in the Netherlands, an upwards of 18 degrees (maybe even higher) for a couple days even though the rain is still prevalent. I have been taking the opportunity to get out of my apartment and enjoy this nice weather in some nearby parks, Sonsbeek and Zypendaal which have some small ponds and waterfalls.

A lot has gone on since my last blog. I travelled to Berlin and Prague with some of my closest friends during our Easter break, and I finished the first period of the semester. My travel blog regarding Berlin will be posted within the next week or so. Right now we are in “exams” and for me it’s really just a 2 week break. I only have two exams, one I have already written, Dutch (and yes I passed), and this Friday I have Dutch Economy. This last exam will be easy for me because some of the concepts we have gone through I have learned in previous economics’ classes back at MacEwan. I start my second period of this semester (same classes) next Tuesday because lucky for me I get Monday’s off this time around. 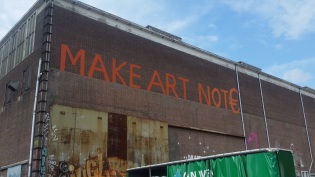 This past weekend I attended the biggest flea market in Europe, IJ Hallen in Amsterdam. It was my first time ever visiting a flea market so I mainly just looked around to see what kind of nifty items people were selling. I came home with a nice summer dress (€3), a vase (€5), and an Arnhem collectible spoon (€1,50). 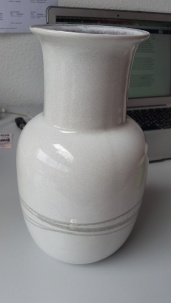 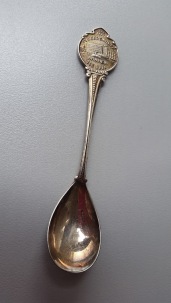 I was on the lookout for a vase that had a big enough neck to fit a small bunch of tulips in.

On Friday evening I was invited to a Bulgarian guy’s apartment on the northern side of Arnhem for a shared dinner with six others. I helped cook the chicken with two other girls one from Kazakhstan, and the other from Ukraine. It was nice to finally meet some new people and surround myself with a different social circle. The two girls Olga and Alina are living with a Dutch family and they are current students at HAN, along with the other three guys. They get classes with Dutch students and they have a bigger course load than the ABS exchange students. I wish we were in classes with Dutch students so we could learn more about their culture and have a regular school schedule like normal students. I typically have one Dutch economy class every week (along with 2 other courses) except Dutch I have that twice. At least the classes I’m in (except Dutch language) are not that challenging for me, and I wish I had taken five classes instead of four.

If you’re anything like me where you’re almost 25 years old and you don’t enjoy partying every single week, you often find yourself looking for new things to do or see, and meet people who share common interests with you. It’s hard being one of the older exchange students sometimes. You don’t share the same interests with those younger than you, or you’re very independent and prefer to do things by yourself sometimes. But I have met some incredible people here that I have learned a lot from, and likewise. I’ve turned my Nutella-addict, Spanish friend (and roommate) Mariana into a lover of peanut butter; I’ve helped influence my other friend (and roommate) Madina into the world of weight training and nutrition. So it’s my pleasure to say that I have some really awesome friends here! A few weeks ago I was feeling very down and not myself. My roommates surprised me by making me a frozen oreo cake. It was so sweet and such a surprise. I originally thought they were conspiring against me because they wouldn’t tell me what they were blending up. We all see each other through good times and bad, and I’m very grateful that we have each others backs! Thank you girls! xo

Every week I have been buying new flowers at the local market. Last weekend I bought the orangey-pink gerbera daisies, and this past weekend the white cymbidium orchid. Next weekend I will buy tulips because I finally have a big enough vase for them. 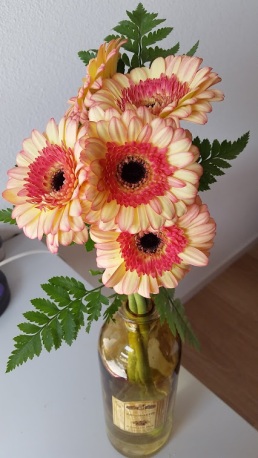 In May Giro d’Italia 2016 (a cycling race) will kick off here in the Netherlands starting in Apeldoorn, then to Arnhem and Nijmegen, and will finish in Turin, Italy. To support the race in Arnhem the city has painted a bunch of bicycles and dyed some t-shirts pink.

I did some of my own research a week ago and found out that they painted a total of 100 bikes, and of which, 18 have been stolen. I took this picture a week and a half ago when they were displayed on the streets. I found out that they had to remove them from these places because people were stealing or vandalizing them. Now they are displayed in high places such as in trees and balconies. Unfortunately I did not get a picture of the hanging bikes because my phone was at 4%, so I promise to post it on Instagram later this week (https://www.instagram.com/stefica.lav/)

Well, now I better get back to studying for this exam I have on Friday. I hope all is well with you and happy spring!

2 Replies to “Springtime in the Netherlands”