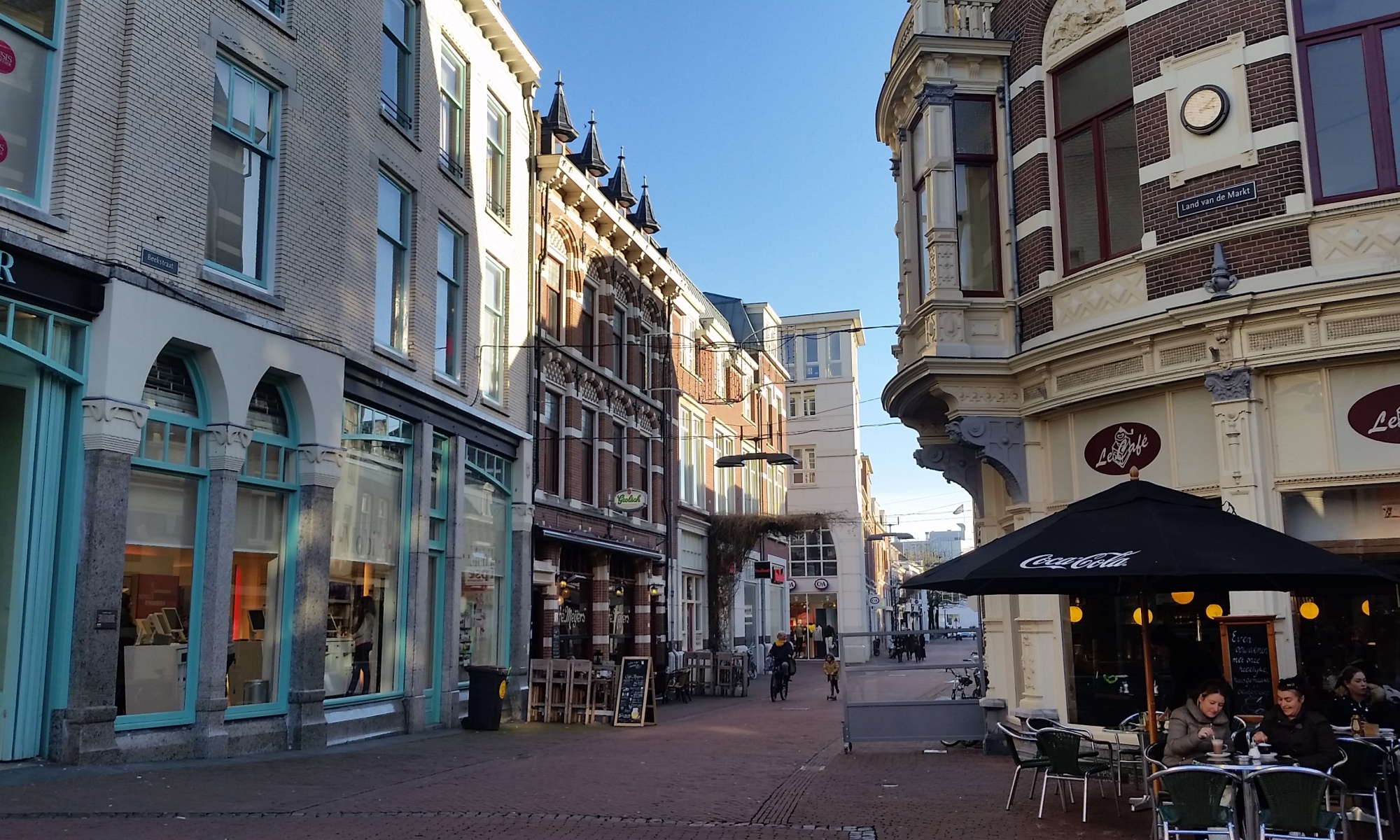 Before my arrival to Arnhem, I was led to believe it was a small town. For some reason this was instilled in me until I arrived here of course, then that obviously changed when I saw how huge the central train station is. I guess I need to Google destinations more often.

So I arrived on Wednesday evening (January 27) at the Amsterdam airport where my friend Niels came to meet me and we took the train together to Arnhem. I met him last semester at MacEwan as he was an exchange student there. Since he is a student here in the Netherlands, he can give other students a 40% discount for train rides. They are quite expensive, around €16 for a long distance trip from one city to another within the Netherlands. I only paid around €10 for my trip because I was travelling with him. Hooray for discounts!

The train was cool, it had two floors and free Wi-Fi. The train ride was about 1 hour to Arnhem and we got there around 9:45pm. When we got there I met with my roommate Madina and her friend Candela from Spain so I could get the key to my room. Niels helped me with my other luggage bag and Candela showed us the way to the Montevia building (the student residence), which is a 5 minute walk from the central train station in Arnhem. She was so cute walking us there and talking about Arnhem in her Spanish accent, haha.

Once I arrived in my room reality sunk in hard. It was weird seeing my new home for the next 6 months and having to come to terms with living with roommates again. I haven’t lived with roommates for about 4 years and this time it was in a much closer living space. Niels eventually left after he helped me in with my luggage and I officially had moved in. I went into my room, sat on my bed and cried. I couldn’t believe I was here and it was real. I didn’t know how to feel because this was all so new to me. In a sense I was feeling a bit scared because I was in shock and felt nervous about my new surroundings. I think everyone feels this way when they move somewhere new for the first time. Of course after a while you adjust and get settled in and it becomes normal.

Being here for 4 days now I have definitely adjusted and come to terms with my new surroundings and new friends! There are so many of us exchange students and I don’t think I have met everybody yet! Everyone is so nice and the introductions usually entail, “Hi, how are you? I am Stephanie, where are you from?”. There are a lot of German and Spanish exchange students here; quite a bit of Canadians as well. Only 2 of us are from Edmonton and a few from Ontario.

My roommates are from all over. Madina is from France, Yilin (which I thought was Elaine) is from China, and Mariana from Spain. It is diverse, which I love because we can all influence each other with our cooking skills and languages. We plan to cook each other our specialties, specifically from our culture or heritage, or just what we are good at. There is nothing “cultural-specific” with Canadian food in my opinion. Canada is so multicultural it is hard to pinpoint a specific Canadian food, unless you’re thinking of poutine or anything with bacon or maple syrup in it. I cannot make poutine from scratch but I am sure it’s not hard. However, I do make a really good meat bolognese sauce from scratch and breaded chicken, so I plan on making these meals for them to try in the future.

Update: I did make meat bolognese sauce with pasta for my roommates and Candela (another student living in this building) and they loved it!

On Thursday, January 28 we all had to be at school for the introduction day. This day was great because I was able to meet a lot of the other students who were on an exchange program or a full-time international study. We also went on a tour around Arnhem with fellow Dutch students Thomas and Jasper from the Nijmegen campus. They were hilarious and made the tour very entertaining for some of us who were shy and nervous on the first day.

It’s great to meet all these people from different countries because you can learn about their culture, and perhaps their language as well. You go into this experience with an open mind because you have no idea what to expect or what kind of people you will meet. To some degree you need to let your guard down and just be yourself so you can become acquainted with others from the get-go. Well, this was a little bit hard for me, especially because I caught a cold/sinus/whatever you want to call it in Zagreb the morning prior to my arrival in the Netherlands on Wednesday. It sucked, it really sucked, and I am still recovering. So, from the first day (Thursday) I tried really hard to meet others during the introduction at school because I knew I would not be feeling so great in the coming days as colds progressively get worse if you don’t allow your body to rest. And so it did, but luckily I had acquainted myself with lots of people on the first day. Everybody went out on Friday night to some place called the “Plaza” and there was me sleeping in bed most of the day trying to “heal” myself. One thing should be noted here as I have put heal in quotation marks. Healthcare in the Netherlands is quite different than in Canada. No you cannot just go to a clinic or doctor right away and get prescription medicine, you have to get a referral letter (in my case from the school) to give to the doctor. This proves to them that you are ill and need some special attention. Dutch people let their bodies heal on their own, apparently. If it is really serious, yes you may go see a doctor or go to the emergency room. Obviously I am not going to seek medical attention for a casual cold, but if I had the flu… I don’t know how I could cope without a doctor. Thankfully I had the flu shot not too long ago, so I should be fine!

And now after all this reading, you get a reward, pictures! 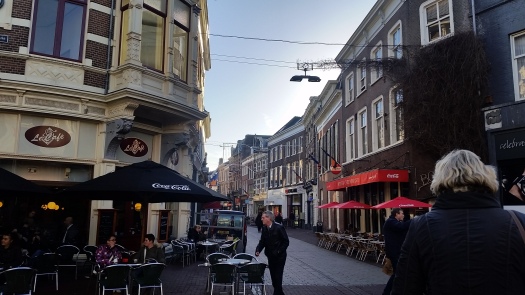 This is a carbonated soft drink that is flavoured with black currants. Our Dutch buddies recommended this as it is popular in the Netherlands. Very good!

See that crazy guy waving at me? That’s Thomas, the Dutch tour guide. He was hilarious!

City centre Arnhem. There were so many more streets like this but I did not take a picture of everything. 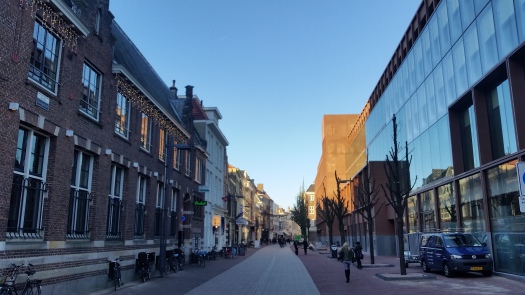 More of the city centre

On Saturday, January 30 I went to the local market here in Arnhem. It runs every Friday and Saturday from really early in the morning to sometime in the late afternoon. I rode a bike I have been borrowing from another student to get there. There are various stands selling fruit, vegetables, nuts, bread, fish, meat, and cheese. The weather was not that favourable that day as it was raining (of course) so I apologize for the semi-quality pictures that I took with my phone…. 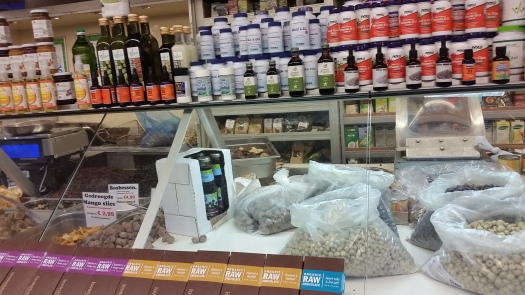 My favourite stand at the market!! They sell everything healthy/semi-organic/etc. Look at the quantity of stevia they have! I bought chia seeds here. 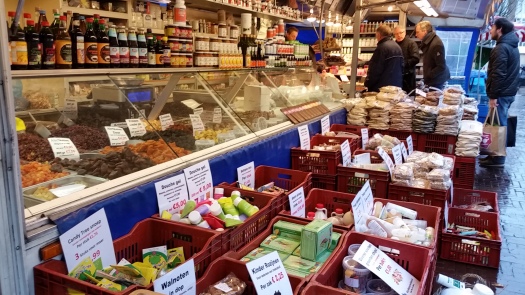 Another picture of my favourite stand at the market 😉 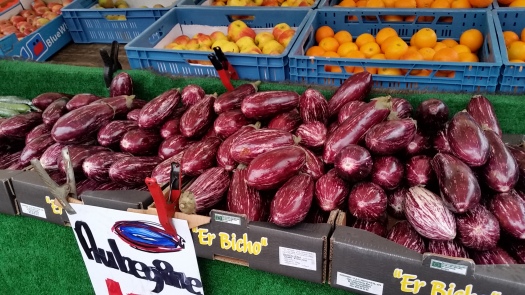 Trust me, I bought some of this!

I don’t remember the name of the fish I bought but I know it was white. The lady deboned and cleaned it for me as well! I believe I paid around 6.15 euros for it.

Everything seemed fairly reasonably priced and I bought a variety of fruits, vegetables, and fish and stashed it in my backpack for the bike ride home. It wasn’t a pleasant bike ride because it was raining and I had a lot to carry. Getting around on bike is so easy here! It is so much faster than taking the bus or another means of transportation in my opinion. There are separate traffic lights and lanes for bicycles all over the city, it’s quite nice actually! When I have a chance I will get pictures of these intersections and post pictures for you to see! I will also be posting more pictures in the coming days when the weather gets a bit better and I can take some “professional” quality photo’s of Arnhem.

So far I love it here. The people are very friendly, and they pretty much all speak English because they are required to learn it from a young age. However the signs and labels on food are all in Dutch, so when I’m grocery shopping I frequently use Google translate.

Wi-Fi is pretty much everywhere–super markets, downtown, buses, trains, restaurants, and cafes. I don’t think I will top up my sim card with any additional data because I hardly even need it, but when I am travelling across town it does come handy for directions on Google Maps.

Everyone bikes around town, even small children. It is the fastest way to get from A to B. Most of the ground is flat, but where I live there is a little bit of a hill you have to climb to get onto the main street. I need to find an alternative route so I can avoid this hill all-together. There are even separate parking spaces for bikes (pictures to come) at all the train stations in the Netherlands. I don’t think there are even parking spots for vehicles to be honest.

My mother was bugging me the other day telling me I should wear a helmet and not conform with the others by putting my safety at risk. First of all, I’ve been riding a bike since I was around 5 or 6 years old. Secondly, I am an adult and wearing a helmet is entirely my decision. Lastly, I am pretty good at riding a bike! Hahah, so if you’re reading this mom, I’m sorry but I am not wearing a helmet. If I fall and crack my head open you can tell me “I told you so!”, but maybe I won’t understand that because I will be brain dead or something.

In a few days I will post some more pictures of this beautiful city and share more stories when I have some down time!